That evening at eight

we walked the narrow trail

via the river path,

that led to the Manikarnika ghat:

Serenading us was a chilly breeze

as we doubled our speed –

once the burning pyres were visible.

There were several men and women,

and rest from the crematorium –

who intently watched the proceedings

as though it were a circus game of cavorting,

Viewers squatted or stood on their toes

alongside the cows and buffaloes

who had the relaxed ringside view,

in between local dogs seemingly rare

but nevertheless always present there.

We crossed a large iron scale

standing tall by piles of logs they weighed,

that did abundant business here;

as for every lit pyre

to ensure the human body dessicated

with no trace of a lifetime’s existence,

to a mere handful of ashes –

whose material source is indistinguishable;

to be immersed into the Ganges below

so it be relieved from the tedious cycle

of several births and deaths

with the furore of achieving Moksh

In the chilly breeze we walked up close,

feeling the sweltering heat of fires below

to where two men sat on an elevation –

from where they kept the scale in their vision,

to supervise a proprietary system,

of allowing the pyre bearers to decide,

till what extent – they would allow to burn

if they couldn’t char the whole human form:

For if you’re in a hurry to leave the ghat

and have a train or flight to board,

you could ask that the unburned parts

along with the naval, intestines,

and the sturdy chest bones of the male,

remain unburned – to be beaten down

so as to be taken to a holier bay or confluence

or be immersed in the Ganges with the part ashes.

One of these men who were in charge

enthusiastically invited conversation with us –

for how many – including me a woman,

care to find out what really happens

behind the scenes of a crematorium:

So he took us upstairs to meet his bosses.

Cremation in Benaras, is a family business

conducted by extended family over generations,

such that each of four real brothers

with extended ones of different fathers –

who run the Manikarnika ghat crematorium,

to have their next turn come up after twenty days –

till when they go back to living in their homes

away from the constant drone of hari bol,

when even in their sleep all day and the night –

they hear the chants in the name of the lord,

that from times immemorial

between the Hindu living and the dead –

till they’ve been turned to ashes

with the hope they will never be born again;

as to be cremated at Manikarnika ghat

assures you that with several lives you’re done.

even if it ensures that those cremated here

have completed their seven cycles of living:

that with the owners overlooks all the proceedings

and every pyre here is lit out of this one kiln

that also views the row boats in the Ganges,

which you can use to go far out midstream

of the holy river that washes away all your sins

and immerse the ashes of your deceased kin. 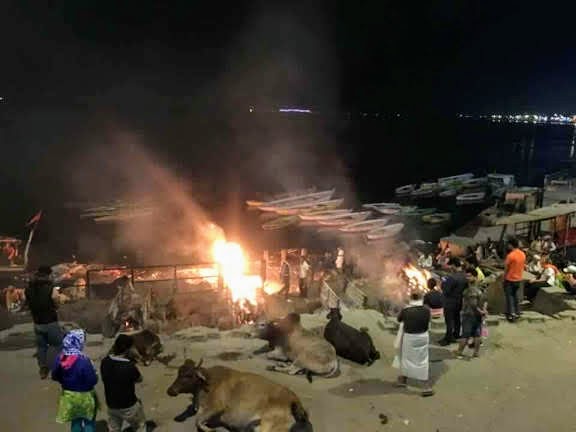